Ft. Collins, Colo. (October 17, 2012) – Clips of Faith, New Belgium Brewing’s traveling beer and film festival, raised about $12,000 at its last stop of the season in Knoxville October 12. About 1,000 people came out to Festival Lawn at World’s Fair Park to enjoy the films and raise funds for The Appalachian Mountain Bike Club, which is dedicated to maintaining the trails and promoting sustainable trail access for off-road bicycles. This year’s proceeds will help build trails in and around Knoxville.

This was the last stop for the 2012 national tour, now in its third year. The tour traveled to 18 cities this year, showcasing amateur films while pouring beer from the hard-to-find Lips of Faith series, as well as a few popular New Belgium classics. Each stop along the tour featured an outdoor screening of the collected films, a tasting of New Belgium’s beers and food from local vendors.

Details from the Knoxville, Tennessee, event:

ATTENDANCE: 1,000 film and beer enthusiasts, up about 450 attendees from last year

Visit www.clipsoffaith.com to learn more about Clips of Faith and www.newbelgium.com for more information on New Belgium Brewing. 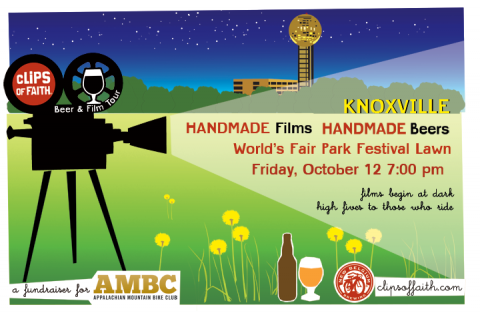 In its third fabulous year, Clips of Faith is a beer-toting, film-traveling, nonprofit-benefiting show that’s coming to 18 cities coast-to-coast, including Knoxville! We took our love for beer and fans and put them together in this one-of-a-New-Belgium-kind event. You’ll get to try our most esoteric beer offerings – up to 16 varieties on tap! – and pair them with inspiring short films created by fans. And good news—100% of the proceeds from beer sales benefit the Appalachian Mountain Bike Club.

Fans of New Belgium’s Lips of Faith beers know these unique brews are not always easy to find. There will also be your favorite New Belgium classics and you can try them in 3oz samples, or a 12oz pour. Served up by our local beneficiary volunteers, there’s plenty of beer fun to be had with our other traveling tricks and contests. Plus, local vendors will be serving food. When the darkness engulfs us, the films start rolling and you get to cozy up on your blanket or chairs and enjoy the show.

We’ll eat and drink until it gets dark—which is when the films will start rolling-and we’ll cozy up on our blankets and chairs and enjoy the show.

Thanks to New Belgium Brewing for their continued support of Appalachian Mountain Bike Club!

Register here to win this KONA Hei Hei Deluxe! The bike will be given away at the end of the Clips of Faith event.

For every $5 you donate here, your name will be entered once. The more you donate, the greater your chances of winning!