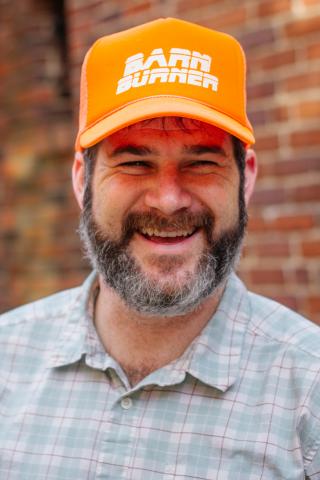 The Appalachian Mountain Bike Club is pleased to announce the selection of former Board President and Club Member Matthew Kellogg as its first Executive Director to serve the organization.

The Appalachian Mountain Bike Club is a 501c3 non-profit organization dedicated to promoting sustainable trail access for off-road bicyclists and to maintaining the trails on which mountain bikers ride and other user groups rely on. The Appalachian Mountain Bike Club supports the conservation of open spaces and is committed to educating mountain bicyclists to ride sensitively and responsibly in order to protect the natural environment and the experience of other trail users.

Hiring an Executive Director has been planned for the club for several years and the Board committed funds for the position in late summer of 2019. “AMBC has continued to grow and our board decided now was the time to take the next step and hire an Executive Director.” states Board President Wes Soward. “There were many great applicants and we ultimately decided to hire Matthew. AMBC is excited to see how we mature as an organization with our first staff position.”

As a past club President and former Board member Kellogg has firsthand knowledge and relationships that will help propel the club through the next phases. Kellogg was at the helm in 2015 when community support made Knoxville the winner of Bell Helmets 2015 $100k trail grant. A grant that funded the building of the “Devils Racetrack” an iconic trail at Baker Creek Preserve in Knoxville’s Urban Wilderness. Kellogg holds a Bachelor of Architecture from The University of Tennessee Knoxville and honed his project management and leadership skills restoring and revitalizing some of Knoxville’s historic downtown structures.

Tasked with maintaining over 70 miles of natural surface multiuse trails in the Knoxville area. The most recent project included the reworking of Marie Myers Park located in Knoxville’s Urban Wilderness. The project aimed to reduce trail maintenance while increasing the number of suitable ride days. Trail users from around the country and our community have great reviews of the new trail network dubbed the #yearroundgetdown.

AMBC has been the driving force for natural surface trail construction and maintenance in the Knoxville area. With support from our partnering organizations and numerous volunteers, AMBC works to help provide natural surface trail access across the 70+ miles of trails we’ve helped build or provide maintenance. We engage the community through monthly meetings, organized trail work parties and special events. Although we are a membership-based organization, we welcome all to come and join us.

Our organization has grown and taken on much responsibility in the community. It’s time to take the next step and we are excited to announce that Matthew Kellogg is our new executive director! Matthew is a former AMBC president and has been instrumental in our growth thus far. You’ll be hearing much more from Matthew in the future! (Tidbit from former president, Randy Conner- we started out with seventeen members and had meeting attendance of around eight people!)

Carly Pearson came to tell her inspirational story about how adaptive sports programs have changed her life since her catastrophic spinal cord injury. Leslie King with the Knoxville Catalyst Sports chapter, shared their upcoming fundraiser and screening of I’ll Push You: A Camino Journey of 500 Miles, Two Best Friends and One Wheelchair. It’s Saturday, February 1st at Onsight Rock Gym. All proceeds will go to Catalyst Sports of Knoxville. TICKETS are $10 and include a Q & A from adaptive athletes in Knoxville and surrounding communities.

Huge THANK YOU to the City for prioritizing outdoor recreation on a major scale. This is a one-of-a-kind, groundbreaking (ha!) project that’s a BIG DEAL for Knoxville. None of it would be happening without YOU ALL. Our cycling community is pretty awesome!!!

Alex Clark has a new venture – Knoxville Outdoor Tours . He’ll be hosting guided mountain bike rides around the Urban Wilderness. He’d love to take any visitors or new riders around to show them our awesome trails. Give them a like!

MARK YOUR CALENDARS FOR FUN STUFF COMING UP!

Temps are dropping overnight, and that means the freeze-thaw cycle is back. Our more weather-resilient trails at Sharps Ridge and Loyston Point should be good to go, but other trails might require a few hours of drying in the morning after a frost. Please be conscious of this during the colder months, and stay off muddy trails!

We had another record-breaking number of entries this year — a massive THANK YOU to everyone who entered and shared the giveaway. Every dollar goes back into building and maintaining trails in and around Knoxville — we truly couldn’t do it without you. We’ll see you all next year at the 11th annual AMBC Fall Festival on Nov. 7, 2020!

This summer, we took an epic mountain bike road trip, stringing together three different Eastern Tennessee trail networks in three days. Between Knoxville, Windrock Bike Park, and Johnson City, there were a wide variety of options for every type of rider. Here’s Part One, showing where to ride in Knoxville, TN…